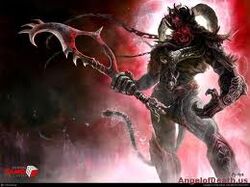 Add a photo to this gallery

Since time immemorial, Aralu, the Kingdom of the Dead, has harbored the lost and disturbed souls that once inhabited the mortal world.

It is an evil place, untouched by the passing of time, ruled over by a Dread Lord and his Queen. For centuries, it had been thought lost, destroyed by the cataclysm that wrecked the world many ages ago.

Now recent tales have surfaced, brought back by brave adventurers from the north: rumors of a huge dragon-like creature that stalks a stonelike forest. Confused and delirious, the survivors of those terrors are nearly unintelligible. The only common thread to their tales is that the kingdom lies somewhere north and east of the great city of Midgaard.

If you discover the small leather-bound diary, you'll find this clue:

This looks like a diary or account of the travels of the wandering
scholar Thereus, it tells of his many travels. Included in it is an account of
his final journey...Here, Aralu. It tells how he tricked his way past Nergi by
dressing in the clothes of a dead warrior and how eventually he gained entrance
past the black door, by assembling the four keys...The last few pages however
make almost no sense to you. Seemingly the ravings of a mad man, desolate
plains, fiery skies, and howling winds...

The Four Goddesses of Aralu cannot be reached via standard travel as they are located in an !door room.

As you enter the area (Stone Forest), keep an eye out for the invisible/hidden Peist (chameleon cloak).  He's a surprise if you're !glow and not prepared to be 3x ANNIH.  He's !phys, too.

The Storm Warrior (mob keyword: "warrior") is west of the entrance in A Peaceful Grove. If you let him area, you can use the Lost Souls as pets to help beat him down.  Sometimes you get lucky and the Peist is in the grove with the Storm Warrior. The Warrior can be subdued with Bardic, Ranger and Clerical debuffs. He won't purge glow or buffs, but will liberally area. Keep your healer out and PFE if possible, to stay out of Peist combat.

(A part of the Deathly Hallows loads crash only! in the small sapling in The Clearing here.)

Work your way south past the blocking Baintes and get the bone key to the main gate from Nergi.  He tosses and has an entropy proc.  Be advised.  (Nergi loads the Bone Staff which is part of the Staff of Many Parts.)

Use his key to enter his private quarters. You'll find an invisible chest containing the rotting flesh vest and a jeweled skull +cha holdable treasure item.

Pick up the glimmer of hope from inside the corpse as you enter the Castle.  You'll need this key after gaining entry to Mannam's Keep.

To access Mannam's Keep, collect the black metal key parts from the Armourer (west from gong under Hall of the Fallen, pick only), the fountain well in the center of the Keep Square (inside well, crash only!), Kasir (east off the Square in barracks) and Narre (above the library).  The metal key parts are max limit 3 (three iterations in game before the load is blocked), and the Kasir and Narre equipment loads will be blocked if those parts reach their max limit. If you are farming Kasir and Narre items, make sure you junk the key parts.

Once you have all four key parts, "make key" to enter the Keep door and use the glimmer of hope to unlock the mouth. Keep in mind that the fountain key is crash only, so you'll get access to the Keep once per uptime. Prepare for a long gate watch if you're farming the Jeweled Skull Spike.

Mannam is all south along the corridor.  Take a quick hike east halfway down the hallway to the High Priestess.

South past three pairs of Frei-Froide warriors is Mannam and his consort Asherat.  They occupy an !magic room.
Asherat is aggro! Take her down first.  Use your striking Sohei to dispatch the tossing, entropy-pointing Mannam.

The demon room is not accessible by doors and is teleport only.

Dank's hand drawn map of Aralu and the Stone Forest

Dank's hand-drawn notes on the Stone Forest, which was later included in the Aralu fortress map.

Michael French's Aralu masterpiece with mob annotations.
Add a photo to this gallery
Retrieved from "https://jedimud.fandom.com/wiki/Aralu?oldid=10533"
Community content is available under CC-BY-SA unless otherwise noted.